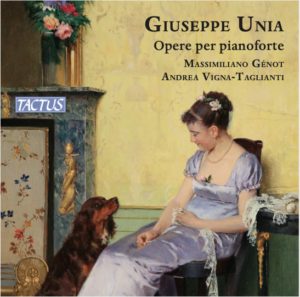 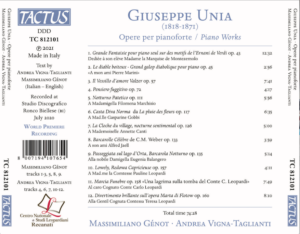 Giuseppe Unia: a romantic Italian pianist between Schubert and Leopardi

At last it is possible to present to the public the first monographic recording of works by Giuseppe Unia (1818-1871), who in the eighteen-sixties could boast the title of “court pianist-composer to His Majesty the King of Italy”, like his better-known colleague Hans von Bülow, court pianist to Ludwig II of Bavaria and his friend Alfred Jaëll, pianist to the King of Hannover.

The titles of his pieces reveal a precise artistic and professional strategy aimed at two goals: on the one hand, the celebration of Italian national qualities, with constant references to the great operas of Rossini, Bellini and Verdi, transcribed and rewritten into various degrees of complexity; on the other hand, compliance with cosmopolitanism, through the customary tribute to the leading European cultures, i.e. the Austrian-German one and the French one.