Those who know Liszt’s music would surely agree that the Harmonies poétiques et religieuses is one of the most personal works he ever wrote. It was written to enshrine his personal and artistic commitment to a new life and a new love in Weimar: the Princess Carolyne Sayn-Wittgenstein. The fusion of poetry and faith conveyed in the work’s title refers not only Liszt gratitude for his mistress many sacrifices in their liaison, her martyrdom of love (as he put it), but also for the spiritual, faith-driven core of their relationship. Beyond the personal, in Funérailles the work has a political and moral meaning too: composed in the aftermath of the failed Hungarian War of Independence, it is surely one of the most profound utterances on the futility and suffering of war.

It was therefore with great expectation that I recently attended a recital given by one of Dr Leslie Howard’s students, the young Italian pianist, Andrea Vigna-Taglianti.

From the first bars of Invocation in which Liszt summons up Lamartine’s voice of my soul, A. V-T made clear that he was going to rise to the occasion with conviction and courage. In Ave Maria and Pater Noster he stylishly conveyed the reverential simplicity of the music, while in Benediction de Dieu dans la solitude  he expressed the serenity of a heart that overflows with faith with care and sensitivity  if, at times, with articulation that was a little blurred. This apart, his technique, as well as his grasp of the music, rose to the challenge in the rhythmically and emotionally dense world of Pensée des morts, and in the anguished tumult of the elegy that is Funérailles. A V-T was clearly in his element in Hymne de l’Enfant à son reveil, while in Miserere d’après Palestrina he deftly blended the meditative melodic line with the extravagant arpeggio passages. In Andante lagrimoso and Cantique d’amour with which Liszt draws the work to a close, A. V-T captured the requisite mood of quiet reflection with playing that was both subtle and committed to the music.

AV-T already has a technique that will surely gain in articulation and resonance as he matures as an artist. To hear a young pianist play one of the most challenging works in the repertoire with such insight and panache was both a privilege and a pleasure. Bravo! 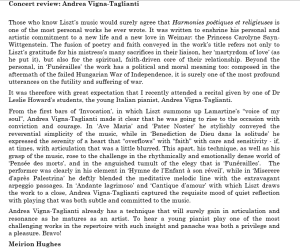